My hypothesis on the origin of musculoskeletal disease, stated and illustrated as concisely as I can at the moment:

Increased microbial virulence relative to host immune-function at absorptive surfaces, such as the lungs and the intestines constitutes a major threat to host physiology. This elevated threat-level is the result of a complex interaction between the host and the commensal microbiome, influenced by genetic, behavioural and environmental risk-factors, which to a lesser extent also affect the host through mechanisms that are independent of the microbiome. To avoid parasitic influence, the host reacts by up-regulating local and systemic defense-mechanisms which can be grossly summed-up and labeled as “inflammation”. The inflammatory response necessitates a metabolic compromise between immune-cells and the main functional cells of the tissues, leading to a state of pseudo-starvation in the latter. A similar state can also be caused by direct microbial influence. If the state of inflammation is prolonged, this will cause a progressive decline in tissue quality and function and in the tissues of the musculoskeletal system this process can also be hastened as a function of mechanical load. Pain-related symptoms from musculoskeletal tissues mainly develop as a modifiable consequence of the inflammatory response and serves as a mechanism to lessen or prevent the occurrence of simultaneous exposure of select tissues to inflammatory stress and demanding physical load, which fundamentally are two physiologically incompatible stimuli. Chronic inflammatory pain is thus an adaptive function, not a fault. 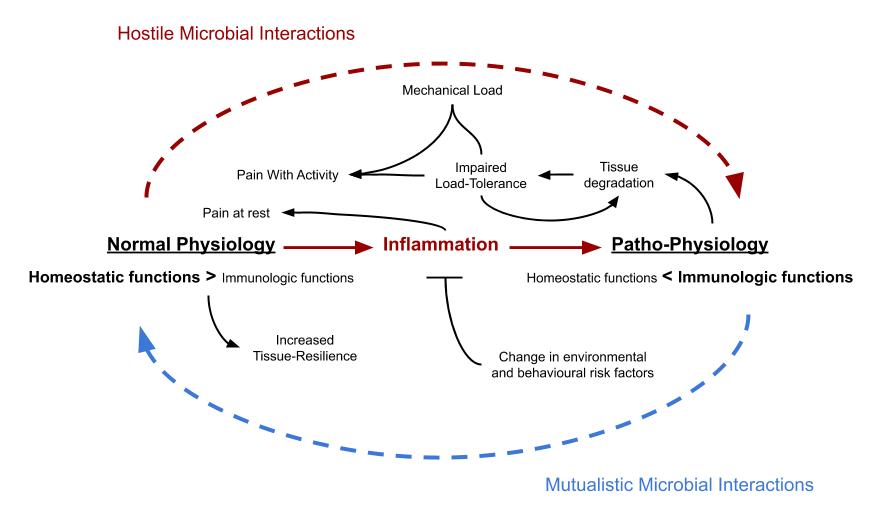 Proposed model for the origin of musculoskeletal pain and pathology. Variables involved in the trigger-mechanism are in red, black shows the pathophysiological mechanism while gray  represents connections with symptomatology. Section-headlines are bolded.

Please note that references to the scientific literature is provided in the other sections of this chapter. This section is only meant to be a summary.

Increased microbial virulence in relationship to host defensive function at host-microbial interfaces like the skin and the gastrointestinal tract signals danger both directly via microbial traces and metabolites, and indirectly through the production of inflammatory cytokines by both epithelial, stromal- and resident immune-cells. These signal-molecules, as well as sometimes live/dormant microbes then reach internal tissues like tendons and synovial joints via the bloodstream causing a defensive reaction where these signals are received. It is an adaptive mechanism selected for its ability to adjust the level of defensive preparations according to the assessed risk of potential microbial invasion. Microbes can also exert a direct effect on host tissues that is independent of the immune-system.

Factor leading up to an elevated threat-level will be those that either lowers host-defensive function, or those that increases the virulence of opportunistic microbes coming mostly from the commensal microbiome. Some examples are:

Detailed in the sections Background and Etiology under the Model-chapter and in Signs of Microbial Presence under the Histopathology-chapter.

Reaction at The Tissue-Level

Explained in detail in the sections under the Histopathology-chapter in the book.

When cells residing in the stromal tissue-fraction receive danger-signals they start to form connective-tissue-barriers around the parenchyme. This barrier serves to facilitate migration and mobility of leukocytes while at the same time complicating the movements of pathogens. Stromal cells also secret pro-inflammatory cytokines which attract leukocytes and trigger focal fluid-accumulation. All of this leads to an impaired nutrient exchange of the parenchyme and altered tissue biomechanics.

Explained in Fibrosis under the chapter on Histopathology.

Cells that are stimulated by inflammatory signals from resident and circulating immune-cells undergoes a phenotypic change characterised by up-regulated passive-defence-systems and enters a dormant-like state, rejecting incoming nutrients. Cytologically the response is characterised by:

Explained in  Insulin-resistance, Autophagy, Apoptosis, Oxidative stress under the chapter on Histopathology, and in Pathomechanism under the Model-chapter.

The responses observed at both the tissue-level and the cellular level converge to induce a state of nutrient-deficiency in the parenchyme, happening as a consequence of defensive functions in the host being favoured over homeostatic maintenance mechanisms, or through direct parasitic influence over host-metabolism. A state of local tissue-starvation despite adequate nutrient-intake or available reserves. This response is characterised by progressive functional decline in the affected tissue as well as loss of parenchymal mass, which causes the dysfunctional and degenerative phenotype observed in chronic disease.

Explored further in the section on Pathomechanism in the model-chapter.

If the initial threat is not handled at the tissue-level the affected cells increases the amount of inflammatory stress-signals being secreted which diffuses into the blood and lymphatic fluid to further activate and recruit specialised immune-cells from the humoral system. Increased amounts of inflammatory signals in the systemic circulation also initiates more complex stress-responses such as increased hepatic glucose-production and de-novo lipogenesis that mobilises stored nutrients to the blood which together with the nutrient-resistant state of the tissues exacerbates the state of pseudo-starvation in the parenchymal cells. This is an attempt to push the focus of battle back from the tissues towards the blood, from the fences to the fields, by making these nutrients available to circulating leukocytes, thrombocytes and erythrocytes. Increased amount of circulatory nutrients also serves direct anti-microbial functions through various abiotic molecular constellations such as advanced glycation end-products and cholesterol-filled lipoproteins. The systemic defensive reaction is (in part) characterised by:

(Well be explored further in an upcoming chapter in the book)

Impaired Resilience to Biomechanical Stress, The Real Root-Cause of Injury

The shift towards a defensive/immunologic phenotype, both at the level of the cell and the tissue as well as at a systemic level causes a compromise with the normal biomechanical characteristics of the tissues of the musculoskeletal system. Joints, ligaments, tendons and fasciae become less elastic, bones become more brittle and the muscles less able to withstand mechanical forces. The overall capacity for ongoing maintenance is also reduced leading to a lowered work-load tolerance over periods of time.