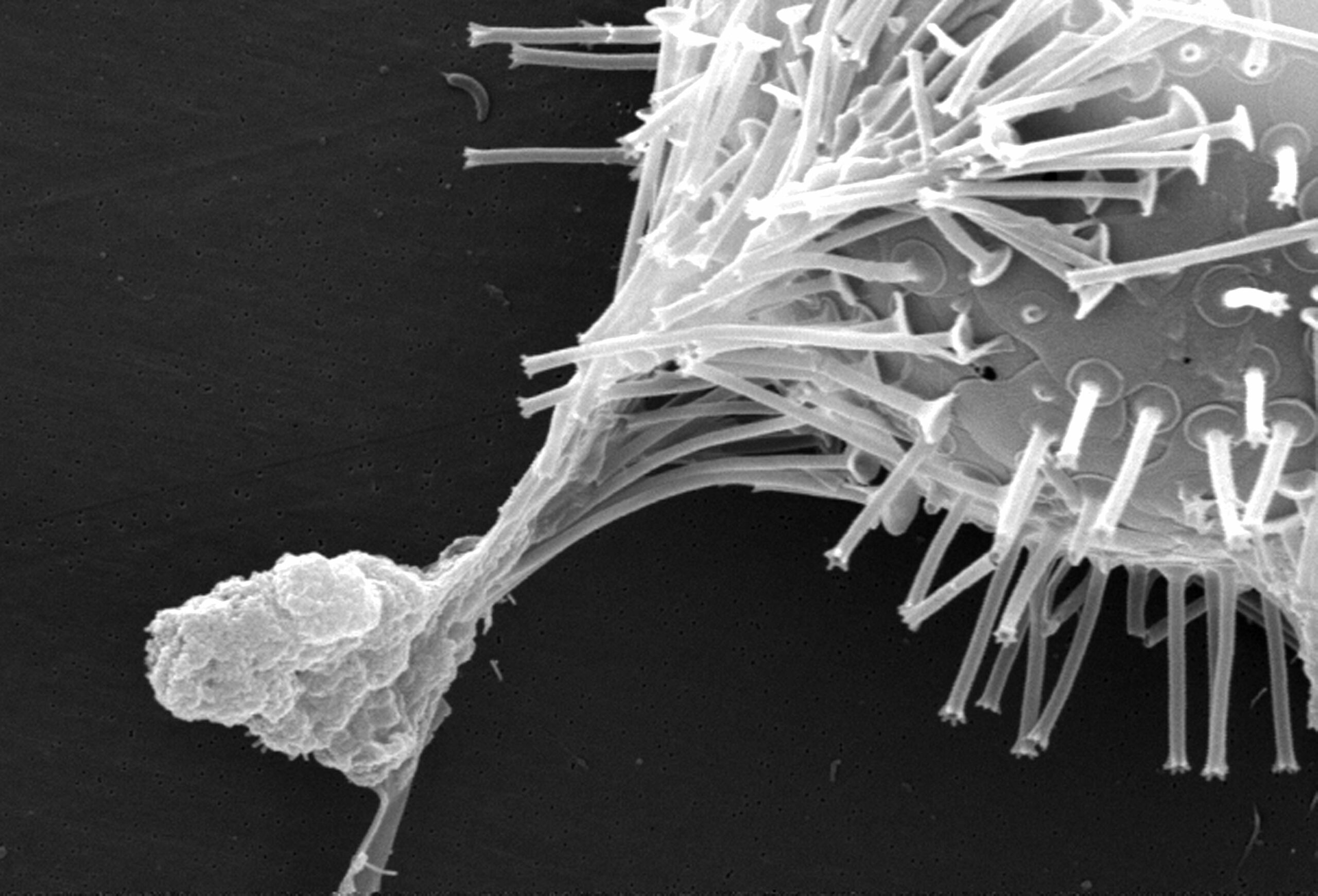 The same things that pulls life apart are also what holds it together.

“Having in mind the potentially devastating effects of getting under (excessive) parasitic influence and the cost of loosing nutritionally essential symbiotic relationships, it could be predicted that a relatively stable equilibrium in the host microbiome will be heavily defended by several parties of the human-microbe super-organism, and it also starts to make sense why the body sometimes generates what would otherwise be perceived as dragged-out and exaggerated immune-responses to these (initially) relatively minor microbial threats.”

Since the publication of “The Germ-Theory of Disease” by Louise Pasteur in 1861 microbes have mostly been associated with pathology, and by the beginning of the 20th century, partly fuelled by the discovery of antibiotics a common perspective were that life would be better if there were no microbial life at all, which ironically was directly contrary to perspective of Pasteur who claimed that life then would not even be possible.1)https://www.ncbi.nlm.nih.gov/pmc/articles/PMC3477854/ Indeed, if we include mitochondria and chloroplasts in this imagined scenario which are cellular organelles that were originally bacteria, all life would seize to exist, literally within a minute.2)https://www.ncbi.nlm.nih.gov/pmc/articles/PMC4267716/ The perspective of microbes being only or mostly agents of disease, and rivals to human health survived well into the 21st century, and only very recently has it become known that they are directly involved also in the maintenance of health in humans as well as in other complex organisms. Hence the problem that currently make scientists scratch their heads is what determines wether our microbial neighbours become our friends or our adversaries.3)https://pubmed.ncbi.nlm.nih.gov/25682593/

The importance of functioning, symbiotic microbial relationships on the level of organisms become very evident when looking at experiments where animals are raised in the complete absence of microbes that normally colonise the skin and mucosal surfaces. The most striking fact about these models is that 50% of test-animals die within three weeks after being born from a deficiency in vitamin-K, a nutrient that is formed and delivered to the host by intestinal bacteria in their normal state, and for the animals to be used in long-term experiments they need to be supplemented with vitamin-K and also B-vitamins simply to survive, but despite this they still have radically inferior health with respect to their colonised litter-mates.4)https://pubmed.ncbi.nlm.nih.gov/17660681/5)https://www.ncbi.nlm.nih.gov/pmc/articles/PMC5006193/

This seems to suggest that microbes are essential for health in a natural setting, but an apparent paradox is that animals devoid of microorganisms are simultaneously resistant to different kinds of non-communicable disease. For example, in some experimental scenarios when fed an obesogenic diet, germ-free animals does not express the classic phenotype of metabolic syndrome which includes weight-gain, insulin resistance, hyperlipidemia and inflammation.6)https://www.fasebj.org/doi/full/10.1096/fj.10-1 In a model of injury-induced osteoarthritis, absence of commensal microbes is shown to be associated with decreased disease severity in young animals and similar observations has also been made with other diseases such as rheumatoid arthritis and cancer.7)https://www.sciencedirect.com/science/article/pii/S10634584183129018)https://www.ncbi.nlm.nih.gov/pmc/articles/PMC5688157/9)https://www.ncbi.nlm.nih.gov/pmc/articles/PMC3986062/ Within certain experimental conditions, germ-free animals are also show to have a longer lifespan compared to wild-types, however they also display several signs of severe physiological defects on post-mortem examination.10)https://pubmed.ncbi.nlm.nih.gov/5944800/ In contrast to their resistance to non-communicable disease, germ-free animals generally have an increased susceptibility to infectious disease compared to wild-type controls because of a naive and improperly trained immune-system. However, in genetically induced models of various non-communicable diseases like atherosclerosis and diabetes type-1 they seem to be worse of than colonised controls.11)https://www.ncbi.nlm.nih.gov/pmc/articles/PMC4095778/12)https://pubmed.ncbi.nlm.nih.gov/20379054/13)https://www.jimmunol.org/content/198/2/590 The paradoxical fact here seems to be that microbes are essential to health, but at the same time they are also the factor that causes or modifies disease-progression in both communicable and non-communicable disease.

The dual role of microbes in health and disease implies that there is a relationship between them and the host-organism that can be either functional or dysfunctional from the perspective of homeostasis. In the literature, the term “dysbiosis” is often used to describe a dysfunctional interplay between the host and commensal microbes that is associated with the expressions of a pathological phenotype in the former. However, this is not yet something that can be accurately and reliably measured diagnostically, and dysbiosis is currently only defined as a relative difference in microbial micro-ecology on a group-level between subjects with select pathologies and healthy controls. Conclusions from qualitative and quantitative measurements with regards to diagnosis or therapy is further complicated by the fact that microbial composition also varies substantially between different types of diseases, between healthy subjects as well as within the same individual across time.14)https://www.ncbi.nlm.nih.gov/pmc/articles/PMC6351938/ Because of this, nobody really knows what constitutes a healthy or dysfunctional microbiome, neither generally nor on an individual basis and we are therefore largely in the dark on how it should be modified when treating disease, as not to cause other problems.15)https://academic.oup.com/jn/article/149/11/1882/5542976 This means that if we are to understand what our relationship with microbes currently is, what it aught to be like, and how dysfunction within this relationship relates to disease we first need to take a step back and look at the bigger picture.

Defining the Nature of Host-Microbe Interactions

A potential clue as to the nature of host-microbial interplay can be found in an article studying longevity in mice. In the study they used two mouse-models differing only in the presence (specific pathogen-free model) or absence (germ-free model) of commensal microbes. These two types of mice were fed either an ad-libitum diet or a diet that was restricted to 80% of ad-libitum intake. When comparing longevity on the ad-libitum diet, mice that were raised in the absence of a commensal microbiome lived longer than the other, punching out after 88.9 and 75.9 weeks respectively, but when on the restricted diet, both groups lived longer, and here the group that were exposed to commensals lived the longest, 109.6 and 117.5 weeks respectively.16)https://www.ncbi.nlm.nih.gov/pubmed/1748169 That the life-span of both of colonised and un-colonised animals were seen to increase in response to nutrient-scarcity might be a phenomenon related to reproduction or cumulative load on metabolic systems, but if we momentarily consider the relative difference in lifespan between the two groups in both scenarios to be somewhat of a proxy for a difference in health, we can infer that the presence of microbes looks to be detrimental to health in the context of resource abundance, while their presence seems to be health-promoting in the setting of resource scarcity. This might be because a resource abundance acquired by the host, here in the form of ingested nutrients creates an ecological niche in the gut that favours species of the microbiome that are competitors for the same nutrients as those preferred by the host, in other words, parasites. In advanced cases, they might even cause a state of nutrient deficiency in the host despite abundant intake. Resource scarcity would instead favour symbionts that cooperates with host physiology and force them to work together with the host as a super-organism to get their respective needs met.

Dysbiosis And Its Consequences

One generalisation about the dysbiotic and disease-associated microbiome that can be derived with some level of confidence from the scientific literature is that it seems to be characterised by reduced species-diversity, mirroring the problem we also face at a larger ecological scale. We can easily see how acquisition of an abundance of select nutrients by the host would favour one or a few microbial species, which would be the winners of the competition in the previous example growing in numbers, partly also at the expense of the losers hence together leading to decreased microbial diversity as a consequence. A potent danger with this situation is that in this way, dominant microbes might achieve a high enough level of virulence which can allow them to gain increased influence over host physiology and to establish a persistent parasitic relationship. This might be how diet is involved in inflammatory disease, causing the body to initiate a persistent systemic inflammatory response as a counter-mechanism to an increased level of parasitic threat. The risk and consequence of parasitic infections may also very well have provided a large part of the selective-pressure in the evolution towards mechanisms that signals for appetite and satiety. However, it’s important to note that evolution is about adaptation over time to changing conditions, that it’s an ongoing arms-race and a series of compromises, not a process of gradual improvement. In support of this, microbes have the ability exploit those same signals, tweaking the behaviour of colonised organisms to their own benefit, affecting food-preference and levels of intake. which could potentially further compromise the health of the host in relationship to microbial virulence.17)https://onlinelibrary.wiley.com/doi/pdf/10.1002/bies.201400071 Some even more traitorous microbes have also been shown to drive particular high-risk behaviours that supports microbial reproduction at the total expense of the host.18)https://www.ncbi.nlm.nih.gov/pmc/articles/PMC3157360/

Reduced microbial diversity can also be achieved by suppression or extinction of some species as a consequence of exposure to anti-microbial substances of various kinds or diets deficient in microbe-accessible nutrients. This opens up for aggressive and opportunistic pathogens because of diminished competition while also creating more subtle problems related to digestion and nutrient acquisition in the absence of the specific microbes that participates in this process, however these subtle problems might later expand as a consequence of time.

Hence regardless of how we arrive at the scenario of reduced microbial diversity, the dangers seem to be more or less the same, and a change in the local micro-ecology that causes parasitic growth while at the same time also causing a depletion of symbionts might create the perfect dysbiotic storm that triggers and maintains chronic disease over time, while host genetics merely dictates the individual phenotypic expression.

Having in mind the potentially devastating effects of getting under (excessive) parasitic influence and the cost of loosing nutritionally essential symbiotic relationships, it could be predicted that a relatively stable equilibrium in the host microbiome will be heavily defended by several parties of the human-microbe super-organism, and it also starts to make sense why the body sometimes generates what would otherwise be perceived as dragged-out and exaggerated immune-responses to these (initially) relatively minor microbial threats. Inflammation is a collective term for the body’s response to stress, including anti-microbial defence-mechanisms, and in the following section we will try to explore specifically how this response relates to disease.